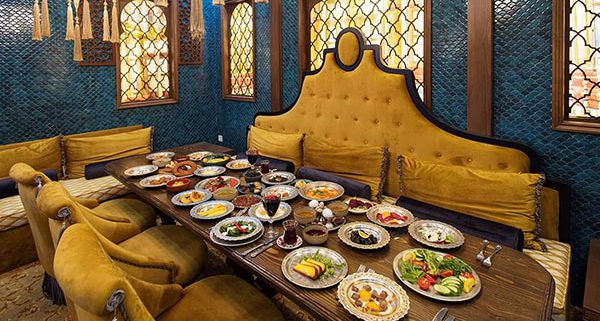 Ottoman Palace Cuisine consists of special tastes prepared for sultans and palace officials in the palaces of the Ottoman Empire. The Ottoman Empire, which hosted people from many different nationalities, was also influenced by the cultures of these peoples. Thanks to this cultural synthesis, the Ottoman Palace Cuisine has become very rich. It has been influenced by Central Asian, Balkan, Middle Eastern, partly Mediterranean, and European culinary cultures.

This special kitchen, which contains many flavors, is mostly seen in Ottoman palaces.

Cooking, an important profession, was protected by professional guilds, which had an important place in Ottoman society. The chefs’ guilds kept the recipes of some dishes secret. Due to this secrecy, some dishes belonging to the Ottoman cuisine could not be transferred for generations. However, it is possible to reach special recipes in some old sources.

As a result of in-depth research, the delicious dishes of the Ottoman Palace Cuisine have survived to the present day. Necati Yılmaz, the chef of Deraliye Restaurant, has made great efforts in this researches. The meals, appetizers, and drinks served in the palaces were brought to light and prepared again. Deraliye Ottoman Cuisine Restaurant offers this Ottoman Palace cuisine ​to its guests.

The palace cuisine menu, prepared in accordance with the seasons, attracts the attention of food lovers. The magnificent tables prepared with special recipes appeal to everyone’s taste.

You have a great chance to understand the nutrition culture of the Ottoman society and especially the palace officials. You will feel like you are in a palace with the Ottoman Palace Cuisine offered by Deraliye Restaurant. Reserve your table for unforgettable moments in Deraliye, which distinguishes itself among Sultanahmet restaurants with its menu.

Try the most special dishes of Ottoman Palace Cuisine with Deraliye Ottoman Cuisine Restaurant, which has a special place among Istanbul restaurant preferences. You can visit our reservation page to contact and make a reservation.

Want to join the discussion?
Feel free to contribute!

What to Eat in Sultanahmet?
Scroll to top